Home > Articles > I Grew Up in Flint. Here’s Why Governor Synder Must Resign. 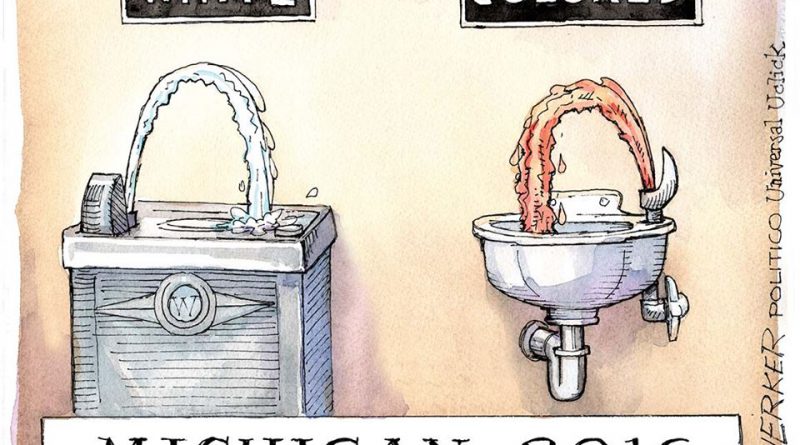 Growing up in a slew of apartment complexes and trailer parks in and around Flint, Michigan, I developed a peculiar habit.

I would stand on the linoleum floor of our kitchen with the telephone pressed against my face, counting. I was counting how long it took my friends to answer the phone — it never took more than four seconds for us to answer in our trailer. Knowing how badly I wanted to live in a house like my friend Dan’s, who took an entire 25 seconds to answer the phone, my mother would look me in the eye and tell me, “We’ll get there some day.” She taught me that hard work would lead me to those opportunities. After all, this was America. I believed her.

But now, if you’re a poor kid growing up in Flint today, forget economic mobility — you don’t even deserve clean water.

Flint’s water crisis has catapulted my hometown into the national spotlight in recent days, leading President Obama to declare a State of Emergency on January 16. The following week, the New York Times editorial board rebuked Michigan Governor Rick Snyder for a “callous indifference to the plight of mostly black, poverty-stricken residents of Flint.”

That the water supply of a sizable American city is poisoned with lead makes for a shocking story. But this crisis is no accident. Rather, it is the result of decades of systemic disinvestment in poor black cities.

It wasn’t always like this. For my family, Flint embodied the American Dream. Lured by one of the nation’s highest per capita incomes in the 1950s, they had traveled to Flint from Texas in search of auto jobs with union wages — and a shot at a better life for future generations.

For my generation, the hopeful narratives that our parents spun us clashed all too harshly with the realities we saw around us. Decades of government neglect and an exodus of manufacturing jobs put an end to Flint’s solidly middle class status. Currently, 42 percent of the city’s residents live below the poverty line.

Flint isn’t the only city in Michigan experiencing this decline. In fact, Flint was one of six cities — most of which were poor and had a majority black population — to be placed under emergency management by Governor Snyder since 2011. The emergency manager law gave unchecked power to the governor in the name of helping these communities emerge from financial distress. But in reality, it unleashed a series of devastating austerity and privatization measures adopted in the name of progress, and took away democratic rights from poor communities of color.

In Muskegon Heights, an emergency manager dissolved the public school system and turned it over to a for-profit charter school, only to have the company bail on the contract because, as the emergency manager put it, “the profit just simply wasn’t there.” In Pontiac, emergency managers privatized or sold nearly all public services, outsourcing the city’s wastewater treatment to United Water months after the company was indicted on 26 counts of violating the Clean Water Act, including tampering with E. coli monitoring methods to cut corners on costs.

In Flint, children were poisoned to save money.

The people affected by these decisions had no recourse to hold decision makers accountable. In Michigan, the idea of a government of, by, and for the people did not apply to poor black cities, and when residents were robbed of the ability to govern themselves, they suffered. In Flint, it meant they got poisoned.

This is not the America that brought my family to Flint in pursuit of opportunity. In fact, my relatives were among the hundreds of protesters at the State Capitol fighting for our hometown during the State of the State address. We’ve had enough. It’s time for Governor Snyder to resign.

If we are a society that believes everyone deserves a fighting chance, we need to be vigilant against undemocratic policies that punish communities for being poor and black. It’s not just Flint that suffers; it’s our democracy.

Art Reyes III is Director of Training and Leadership Development at Center for Popular Democracy.