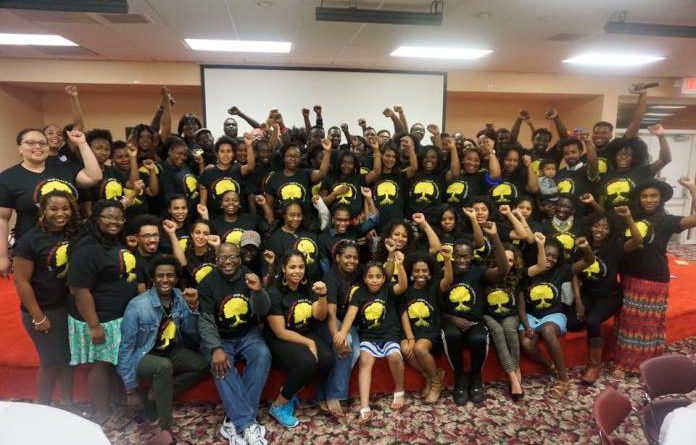 Last year, Donald Trump, the GOP frontrunner in the presidential race, said that he would build a wall on the U.S.’s southern border and have Mexico pay for it. On February 9th, 2016, Donald Trump said: “The wall is probably $8 billion, which is a tiny fraction of the money that we lose with Mexico.” He continued, “We lose a tremendous amount of trade deficits. We have a trade deficit with Mexico that is astronomical, much bigger than that.”

“We will get — and I say it also is also part of my plan — Mexico is going to pay for the wall,” he continued.

In 2015, Trump frankly said that undocumented immigrants “have to go.”

Despite popular belief, immigration reform doesn’t just affect Latinos, it also has an impact on a large portion of Black undocumented immigrants from the Caribbean and Africa.

I had the opportunity to talk with two Black college grads who helped organized the recent Undocumented And Black Convening (UBC) in Miami on undocumented Blacks living in the states, how the event came about, and the Black college experience. Our conversation has been lightly edited for clarity and length, you can check out the interview below.

Robert: How did the UBC go? Talk about the vision of the conference and why it was planned.

Gabby: The convening brought together 65 Black undocumented people from across the country. We gathered for a 3-day weekend of workshops, caucuses, strategizing, and most of all, healing and kinship. It was a safe space specifically created for Black Undocumented folks to develop acceptance, to own their stories, and find their place in the movement to create change. Our initial planning envisioned an attendance of 20-25 people; that weekend, we had gathered as a family of over 60.

Robert: Talk about the vision of the conference and why it was planned.

Jamie: Plans for the convening came together when Jonathan Jayes-Green (another member of the planning committee) posted on Facebook about how disappointed he was in the derogatory comments that were being made by non-Black undocumented persons around the Baltimore uprising and about Black people. These were people he had organized with for years around immigration and it left him feeling disappointed, alone, and frustrated. I reached out to him expressing the desire to be in a space with other Black undocumented folks who were dealing with this double burden, this intersection of being both Black and undocumented. No one really understood what we were experiencing, how heavy it had become, but us.

Robert: Did you reach out to other organizations to help with the conference?

Gabby: Jonathan and Jamie began planning for the convening and holding conference calls with other UndocuBlack folks. It is that shared collective need and drive for this healing space that also led myself, Yannick Diouf and Deborah Alemu to join the planning committee and work non-stop to make the first national gathering of Black undocumented folks a reality. It is important to note that the Undocumented and Black Convening was not organized by an organization. It was convened by 5 Black undocumented people—undocumented African, Caribbean, and Afro-Latino people—from across the country, with a committed vision to create this safe space. This convening and the work ahead will be driven by the affected community.

Robert: Why is it important that Black lives work with Undocumented Lives to attain justice together?

Jamie: If you’re advocating for liberation of all Black people, then one must not forget the lives of Black undocumented people. It’s also important to note that the prison industrial complex that affects Black lives also affects undocumented immigrants. Private prisons are also profiting from the detention of undocumented folks as it profits from incarcerating Black people. These struggles are linked and so is our liberation.

Robert: So advocating for liberation of all Black people is better than fighting for just one of the current movements led by young Black people?

Gabby: Black Lives and Undocumented Lives are not mutually exclusive movements – that’s what we want to point out. The UndocuBlack community literally lives at the intersection of these two movements. However, as a Black undocumented immigrant, you can feel alone and erased from current immigration debates and activism, but glossed over in the discussion surrounding the pursuit of justice for Black people globally.

Robert: What’s next? Were there any call to action items that were discussed at the Convening?

Gabby: The Convening was a kickoff to efforts led by the Black undocumented community to increase visibility, increase access to resources, and empower our community.

Robert: How can our readers keep tabs on the latest happenings in the Undocublack community?

Jamie: Our immediate next steps are for our website to serve as a hub of information for allies and for the Undocublack community and to partner with organizations on webinars, trainings that will disseminate information and resources to the Undocublack community. Additionally, working to highlight the stories of Black undocumented folks in our community to help change the discourse around immigration that has for far too long been seen as a Latino issue. At the convening, we discussed regional convenings planned by attendees on the local and state level as a way to not only mobilize, but to also allow more persons to be in a space where they don’t feel alone in this UndocuBlack life. Attendees highlighted the need to do DACA outreach to Black immigrant communities, establishing a fund for those who need help paying the fees for their DACA applications, and the urgency of providing a system of support for those experiencing extreme financial hardships.

Robert: What did you all discuss about detention centers and the privatization of prisons?

Gabby and Jamie: Criminalization of Black bodies ensures continuous profit for detention centers and prisons. We hear in the media that Black people are at the highest risk for arrests and incarceration, but make the assumption that Black people are at low risk for deportations and immigration detention. At the convening, we spoke about the criminalization of our Black skin, the erasure from the discussion on the immigration and deportation systems, and how being profiled for being Black can lead to being in Immigration and Customs Enforcement custody. Attendees shared personal stories of how they were affected by the prison industrial complex, the mistreatment they suffered in detention, and how they are coping with the effects on their mental health as a result of it.

Gabby: No one person’s experience is the same. Each person has many intersections within their own lives. Many of our Convening attendees offered their stories, their words, thoughts, and experiences, powerful and impactful but often unheard and erased. The biggest take-away for me is that these are our stories. These stories are owned by us, and we are the ones who can and will use them to effect change, and no one else.

Jamie: My biggest takeaway is the different struggles that compound that of being Black and undocumented. Below that layer lie the experiences of being homeless, a detainee, Afro-Latino, queer, trans or dealing with mental illness. We were all bonded by our common intersection of being UndocuBlack, but there were so many other things to unpack and that also needed to be addressed. There needs to be a support system within the support system!

Robert: Why is the conference and the work discussed at the Convening important to the wider #BlackLivesMatter movement?

Jamie: The #BlackLivesMatter movement is for the advancement of all Black people who are being oppressed. That includes Black immigrants who are equally at risk of being profiled, killed or mistreated because of the color of our skin. We’re in this struggle together.

Gabby: Jamie and I are both HBCU graduates from THE ILLUSTRIOUS Howard University. HHHHHHHHHHHHH UUUUUUUUUUUUUUU!

Jamie Richards is a co-creator and co-organizer of The Undocumented and Black Convening, the first national gathering of Black undocumented persons. Her passion lies in community organizing and community development, with a focus on workers’ rights, immigration, and gender equality. She proudly hails from the beautiful island of Jamaica.

Gabrielle Jackson is a co-creator and co-organizer of the Undocumented and Black Convening that just took place in Miami, Florida. Gabrielle is a mental health clinician and licensed social worker whose life purpose and passion is the mental and emotional well-being of the Black community, with an emphasis on Black immigrants. She is originally from the twin isle nation of Trinidad and Tobago.

Reverend Robert Hoggard graduated from American Baptist College in Nashville, Tennessee with a Bachelor’s Degree in Bible and Theology with a concentration in Community and Nonprofit Leadership in May of 2014. He is currently matriculating as a Gene Barlett Presidential Scholar at Colgate Rochester Crozer Divinity School (CRCDS)– earning a Masters in Kairos Studies, expecting to graduate in May of 2016. His thesis, which is being advised by President Marvin McMickle is entitled, “Bridging the Gap: The Looming Gap Between #BlackLivesMatter and the Black Church.” Rev. Hoggard is Director of Fundraising and Membership at Metro Justice, a nonprofit organization in Rochester, New York. Rev. Hoggard is also the Chief Content Officer at HBCU Buzz Inc (The Buzz). The Buzz, is the leading online news source for Historical Black Colleges and Universities.

This post was originally published at hbcubuzz.com. The convening took place on January 15, 2016.